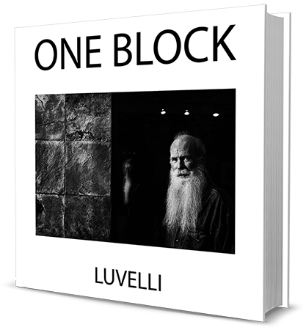 On October 21, 2015, Landmark Bank will be presenting One Block, an exhibition of photographs by the exceptional, American Street Photographer, Jon Luvelli. The awaited event will take place in Alley A, in the heart of The District in Columbia, Missouri. On display will be 24 brand new, large-format, breath taking black and white photographs from Luvelli’s photography book One Block.

One Block presents some of the greatest images from Luvelli, one of the world’s most unique and outstanding Street Photographers. Best known for his ability to flawlessly capture emotion while accomplishing impeccable detail and contrast. This collector’s photography book displays Luvelli’s power to capture the essence of the Midwestern United States unlike any artist has done before.

His most recent, much discussed One Block upholds the true definition of street photography. Capturing the radiance of human emotions and the long history of eclectic essence and hidden beauty Columbia holds. Luvelli spent three years capturing every aspect and walk of life that inhabits the incredible Ninth Street.

Luvelli was so inspired by Ninth Street he wanted to dedicate time to capture its core, and the fascinating One Block was born. While dealing with the personal struggles of his fiancée going through breast cancer, the deaths of his mother and father, and his own intense anxiety attacks, Luvelli released his energy for twelve plus hours a day for three years on the short stretch of Ninth Street. Capturing iconic images of Columbia along the way.

Close to 100 of Luvelli’s carefully calculated images from that one block of Ninth Street have been published in a large-format photography publication. Due for a public release in November and offering 200 limited edition signed copies of the book for Columbia only with an exclusive gallery release.

Luvelli’s highly anticipated exhibit will take place in the heart of location One Block was created. Making a creative statement, unlike anything Columbia has experienced before, the exhibit will consist of twenty four limited edition photographs, printed 24” x 36” displayed on the walls down the entire length of Alley A. The gallery will extend into Galley A, a gallery space positioned parallel to Shortwave Coffee.