A Penny On The Map. By LUVELLI 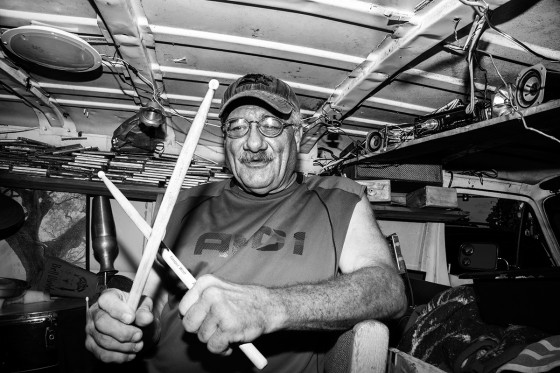 At the onset of golden hour, I was walking down Broadway Blvd. in Columbia Missouri where I’m currently working on two projects. I was taking some street shots as I religiously do, and started getting hungry. I knew what I wanted, the steak fajita nachos from a local restaurant in the downtown district. As I started walking towards the establishment, I noticed the closer I got to the restaurant the louder this music was getting. I was thinking to myself what the hell is that, who is playing that music so loud, as it’s usually kind of quiet downtown. I made a sharp right turn around the corner and instantly noticed an older model white van with all of its doors open using bungee cords to keep them from closing.  When I reached the rugged vehicle I noticed a man in his late 50’s playing the drums inside. Tom Sawyer by Rush was blaring with an overlay of the man drumming trying to keep time with Neil Peart. So I started shooting some shots. I stopped to talk to him when the song was over, and with a smile on his face he pivoted in his chair and turned down his radio. Without knowing it at the time, the strangeness of a man playing the drums in the back of his van was just the tip of this man’s adventure. 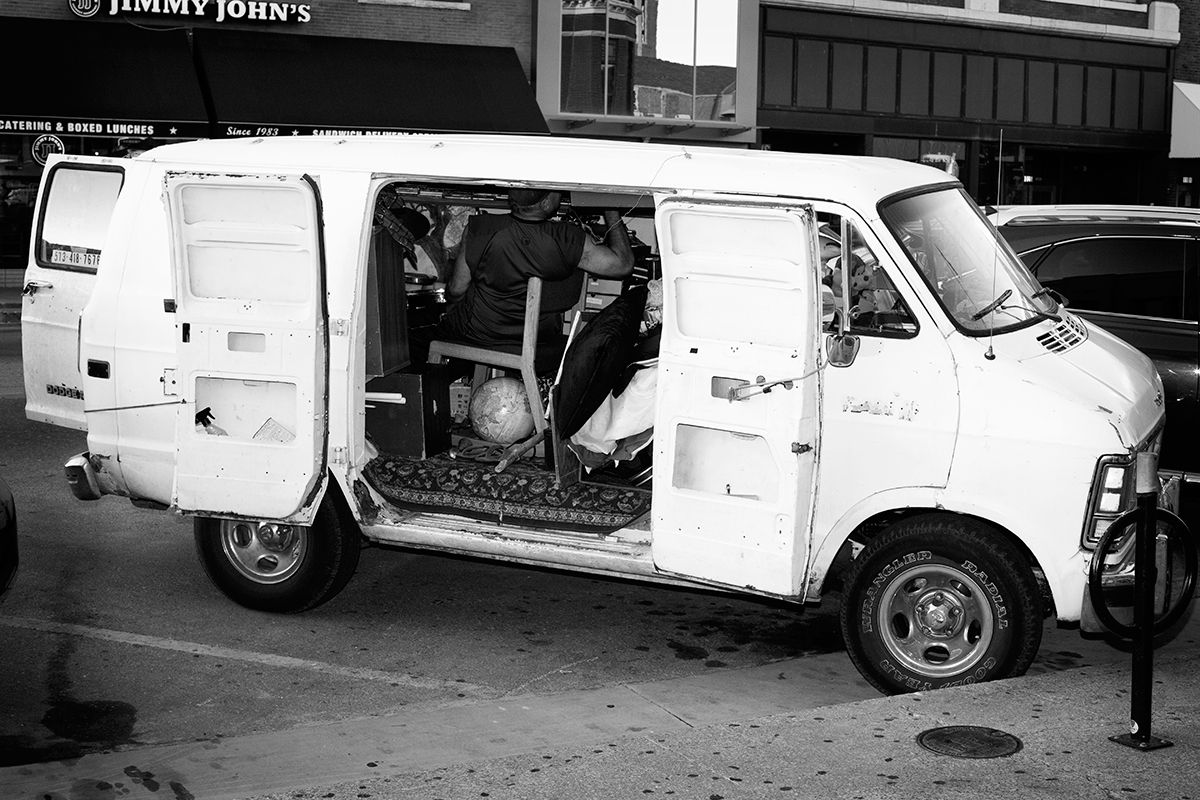 I introduced myself, asked his name and if he was from the area. He quickly responded, “Jay Parks and I’m currently kind of from Russellville Missouri, but I don’t have any property there anymore. I’m not real sure. I’m looking at a lot of things. At the end of the summer I hope to know what to do with my life.” In the same breathe he continued with… “But I am getting healthy enough to go back to work. I can actually run in place, to where I couldn’t even stand in line to cash a check two years ago.” 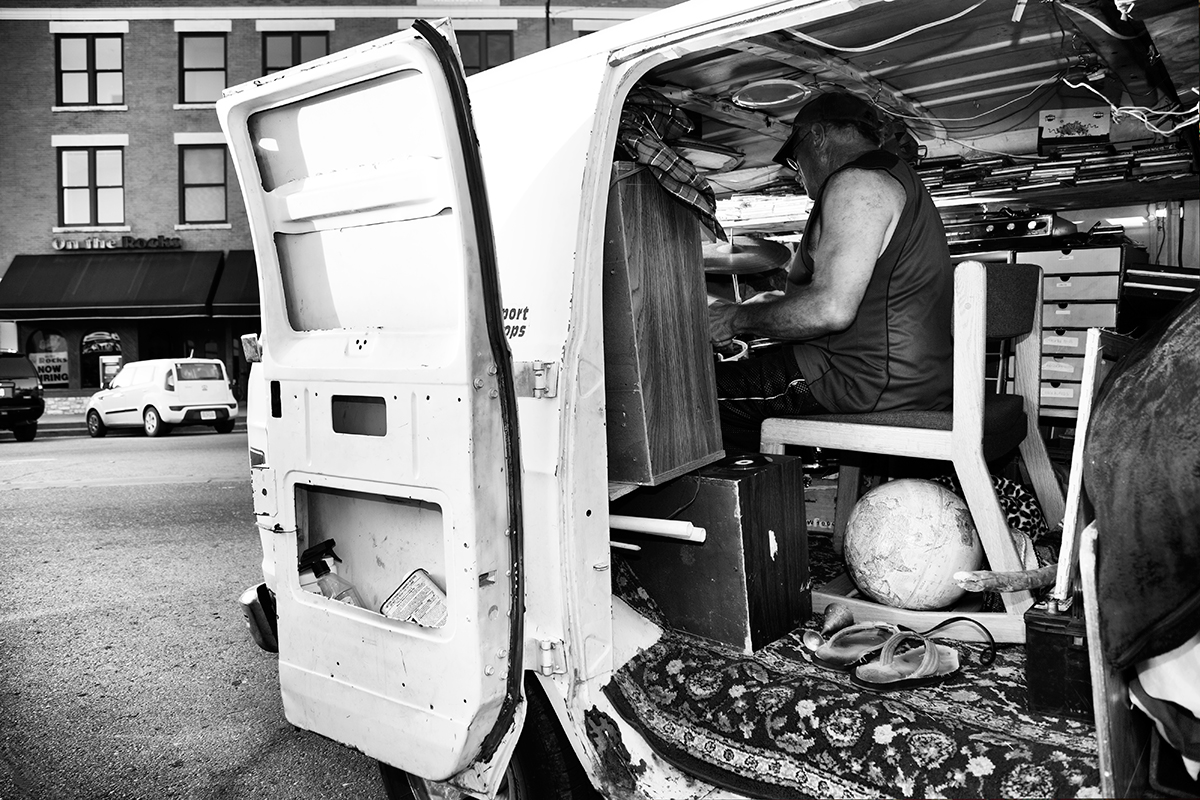 I simply wanted to take some shots, because it was so intriguing seeing someone with a full drum set playing in the back of their automobile. This truly brings a new meaning to the term traveling musician. I received a little more information than I expected. J At his first, slight pause I asked him why he was playing his drums in his van. He explained, “I had drums in my room and I liked them. I had a house fire when I was a teenager. My brother and some of his friends were drunk at three o’clock in the morning and they put an aerosol can in a wood fire stove. I woke up to a big fire swirling.” Then he went on to tell me he loved music as a teenager and was particularly passionate about playing the drums. After the fire destroyed his first set he told himself he wasn’t going to lose his drums again. Shortly after purchasing a new set, he opted out of putting them in his house and instead put them in his green van. “I purchased this white van after the green van I had the drums in broke down…” 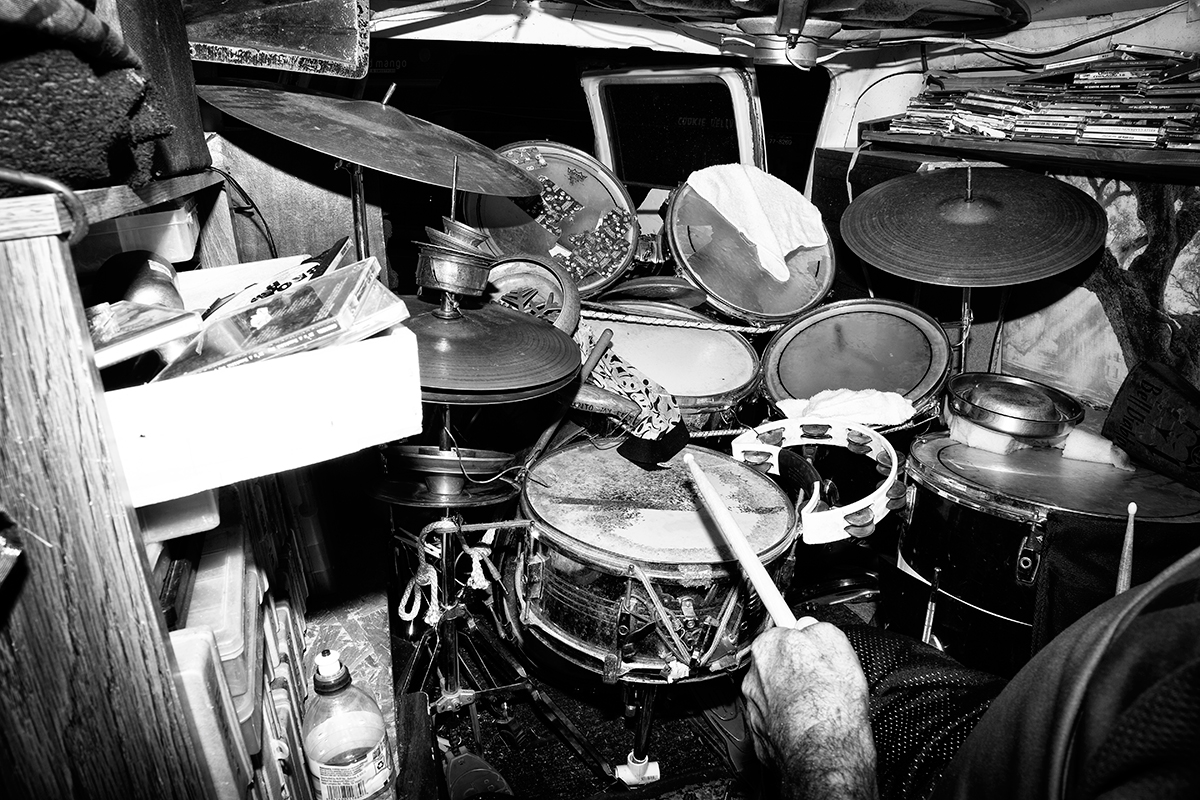 I was impressed by the unconventional masterpiece he had created in the open space of his van. Not only did he have a full PV drum set, he had also collected random items from thrift stores to use as additional instruments he attached to the drums. Along the walls he constructed wooden shelves where he stored nearly 500 CD’s and cassettes. To create an optimal sound experience he attached so many speakers to the interior that I couldn’t even begin to count them. 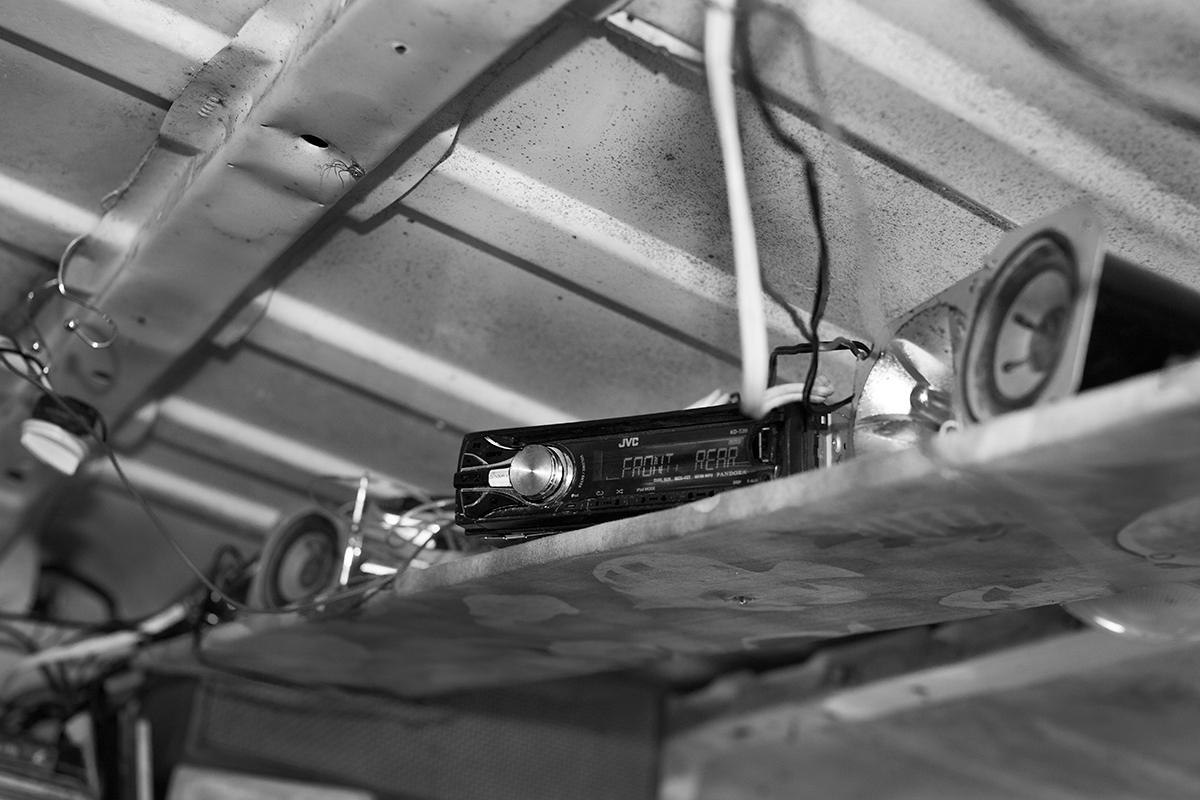 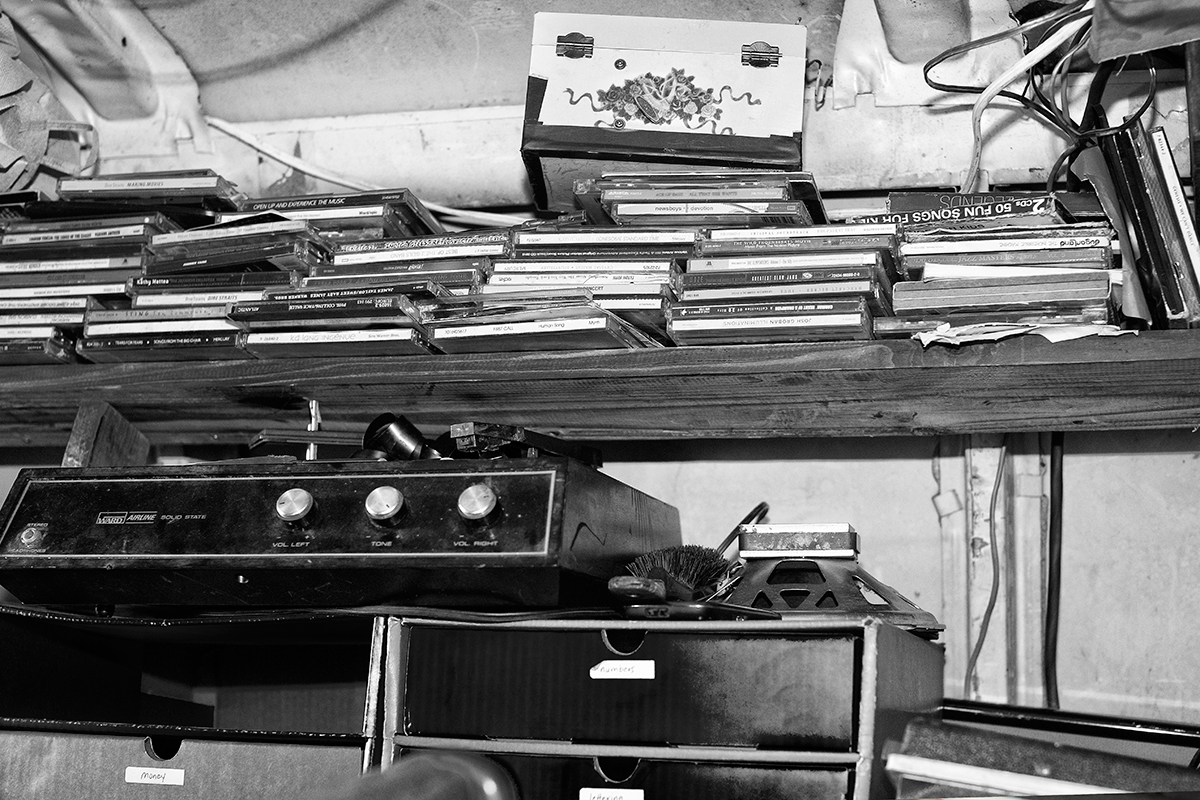 It was apparent that he was now living out of this van with the piles of pillows, blankets, and scattered clothing, and without even asking, he confirmed he had indeed been homeless and on the road for a little over two years. I asked if he was traveling around the state or if he mostly stayed in the central Missouri area. “Yeah, but I’m not doing it on purpose. I want to see my sister in Montana and I want to go to Oregon and I want to see a friend in Idaho. My grandparents were from Oregon and I want to go to the ocean where I have a lot of good memories as a child.” 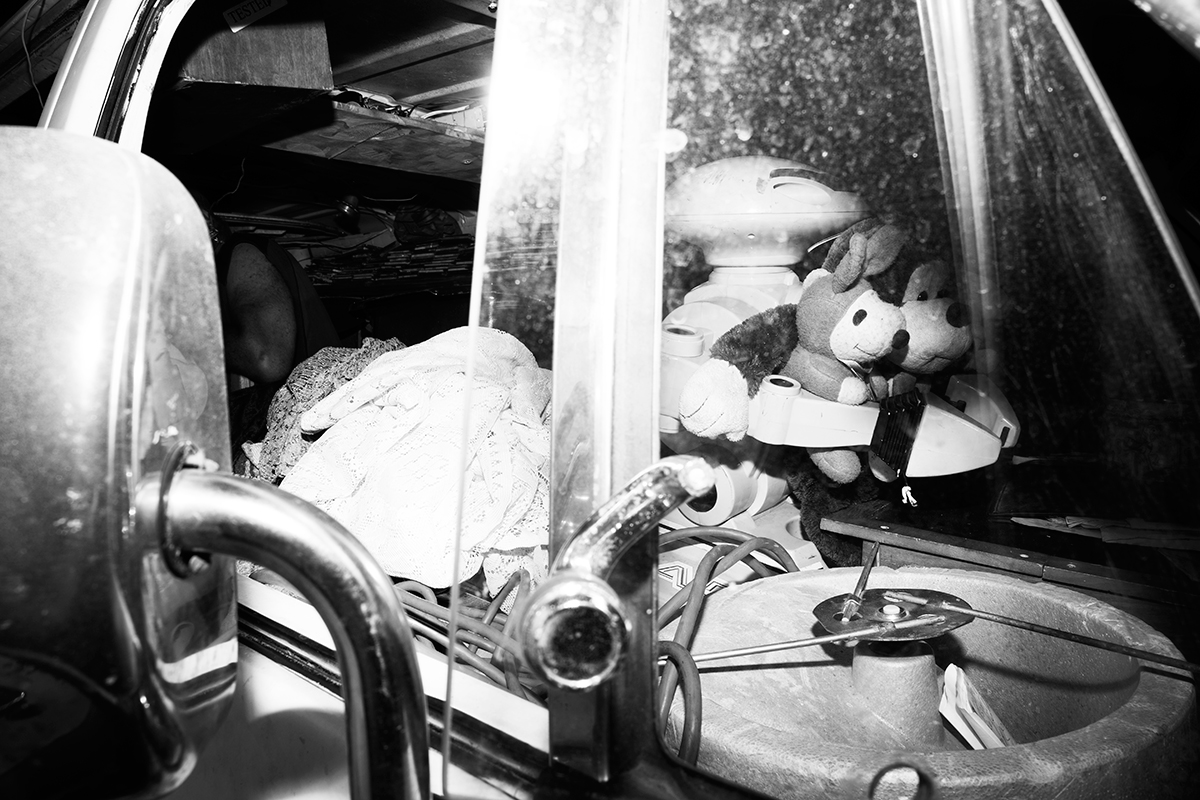 As passionate as he’s been about protecting and playing his drums, he’s equally as passionate about reconnecting with his distant family.

”My daughter called me out of the blue from an airport to say ‘goodbye, mom and me are going to Germany’, she was only 8.”

His full smile quickly turned sadden as he explained to me that he was only able to fly to Germany once to see his daughter when she was in her early twenties. Unfortunately she was diagnosed with a terminal illness and passed away several month later. 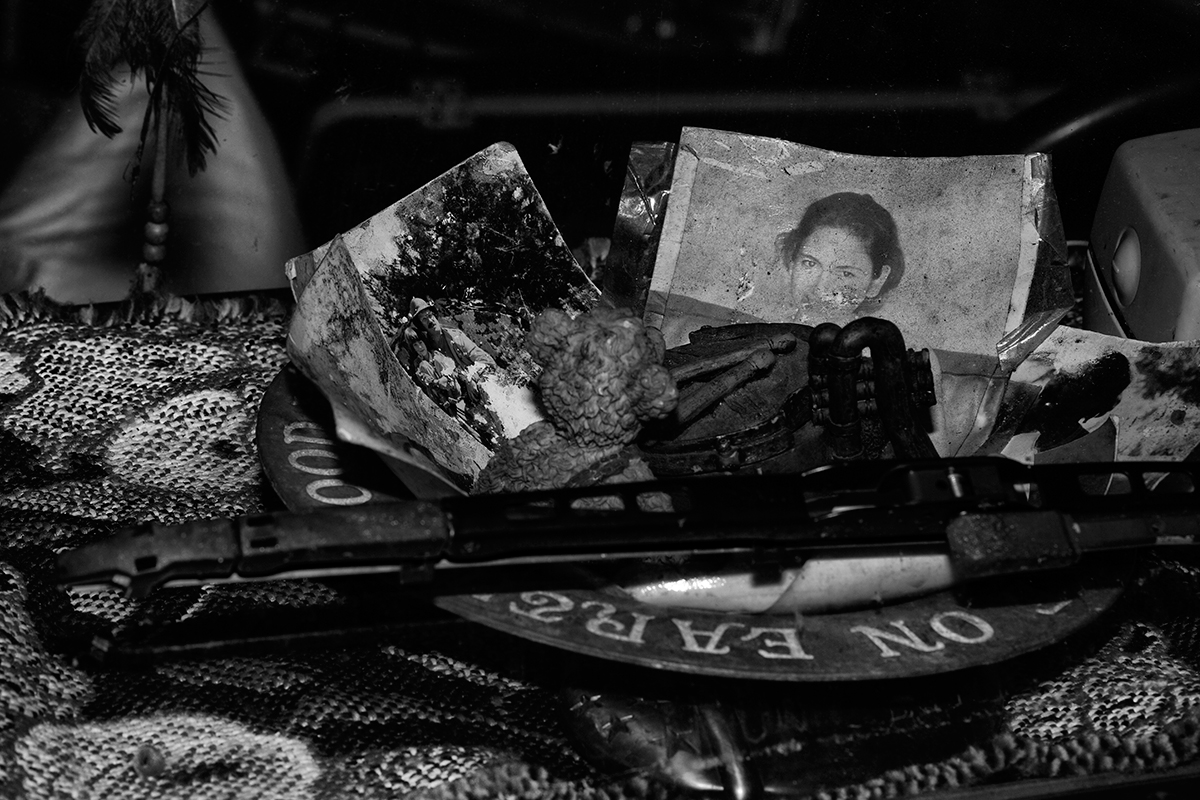 His life took a drastic turn for the worst when he suffered an injury three years ago. “I walked into a trailer hitch, it went from a little hole in my leg to almost eating my leg off. The doctor said if I didn’t put my feet up I was dead. I didn’t believe him, but a month later I was in the emergency room. I still have a rash I’m overcoming from that. It was wild where I didn’t even want to show my hands to anybody because they looked like the hulk. It was definitely warped looking, I think my immune system tried to make extra skin.” Now not only was Ray injured and unable to work, he was also left homeless after the winds of the Joplin tornado took the roof off of his trailer. 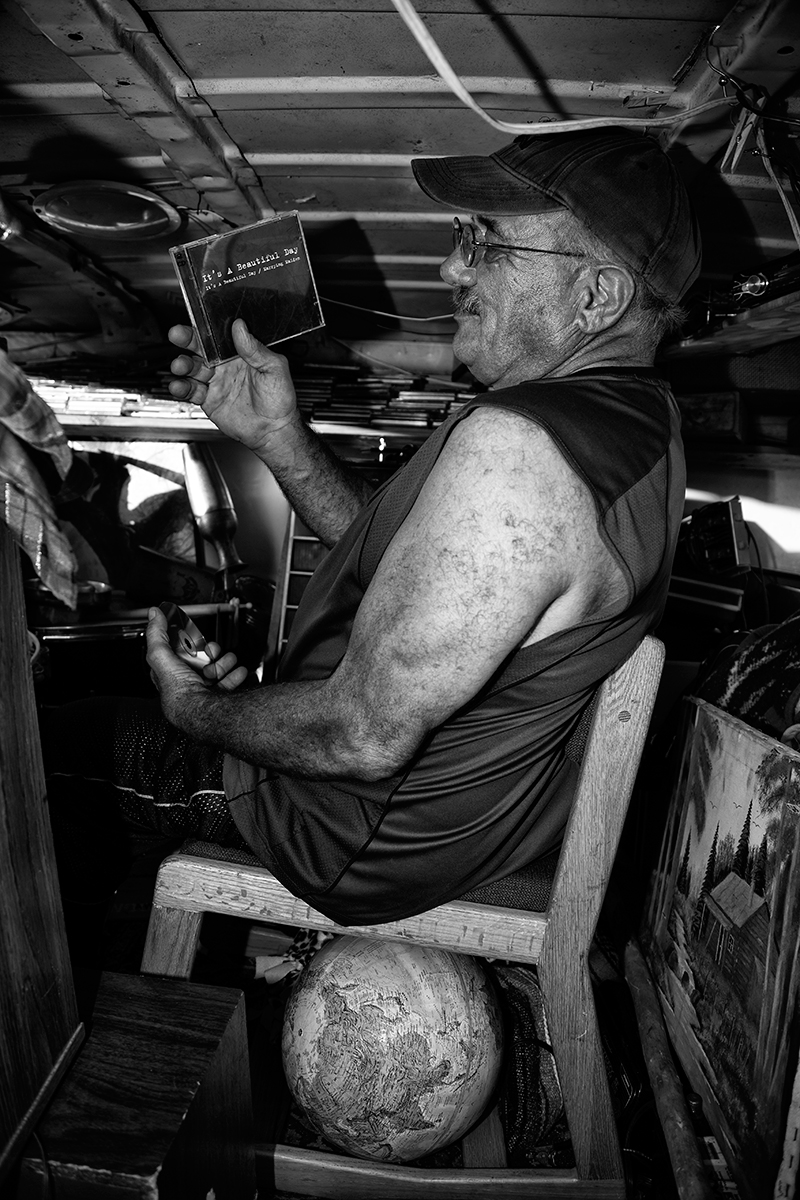 Before his injury he made a living fixing organs for churches throughout Missouri. Recently he’s been able to get back to his work and fix a few organs a month, but I was intrigued to find out what he would rather do than fix organs. “I am getting back into working with organs where I can make a living, but right now I feel like I need to go help my brother Troy. I would like to get him to go on the road with me because he’s old and stupid, plus he thinks he’s smarter than me, not to mention he’s a Buddhist, which is okay, but I’m Christian.” He mentions that they will determine their destination by tossing a penny on a map of the northwestern part of the United States and end up where ever the penny lands. Until he can talk his brother into going on the road with him, Ray is adamant about making his own itinerary, which includes working when he wants, playing the drums in church and, “playing the drums to whatever’s on the radio.” 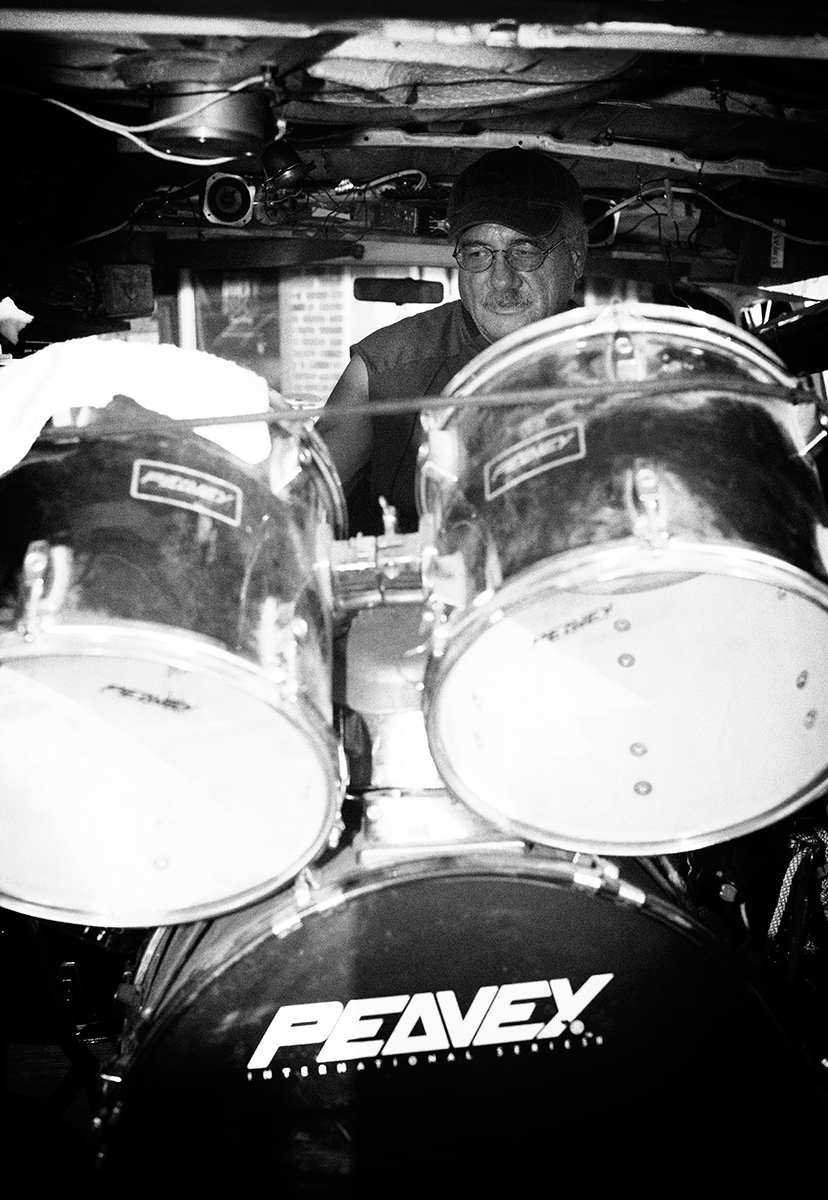 He explained to me why he parks at the same spot in downtown Columbia to play as much as he can.

“I’ve been down here about ten times, on Broadway. It’s just one of those places where you’re allowed to go and I’ve never had the police called on me. I’ve been playing in churches the last several Sundays because they needed a drummer. I feel honored actually to be sitting at these churches and to be involved in what they’re doing, because I listen to the radio and practice for opportunities like that.” 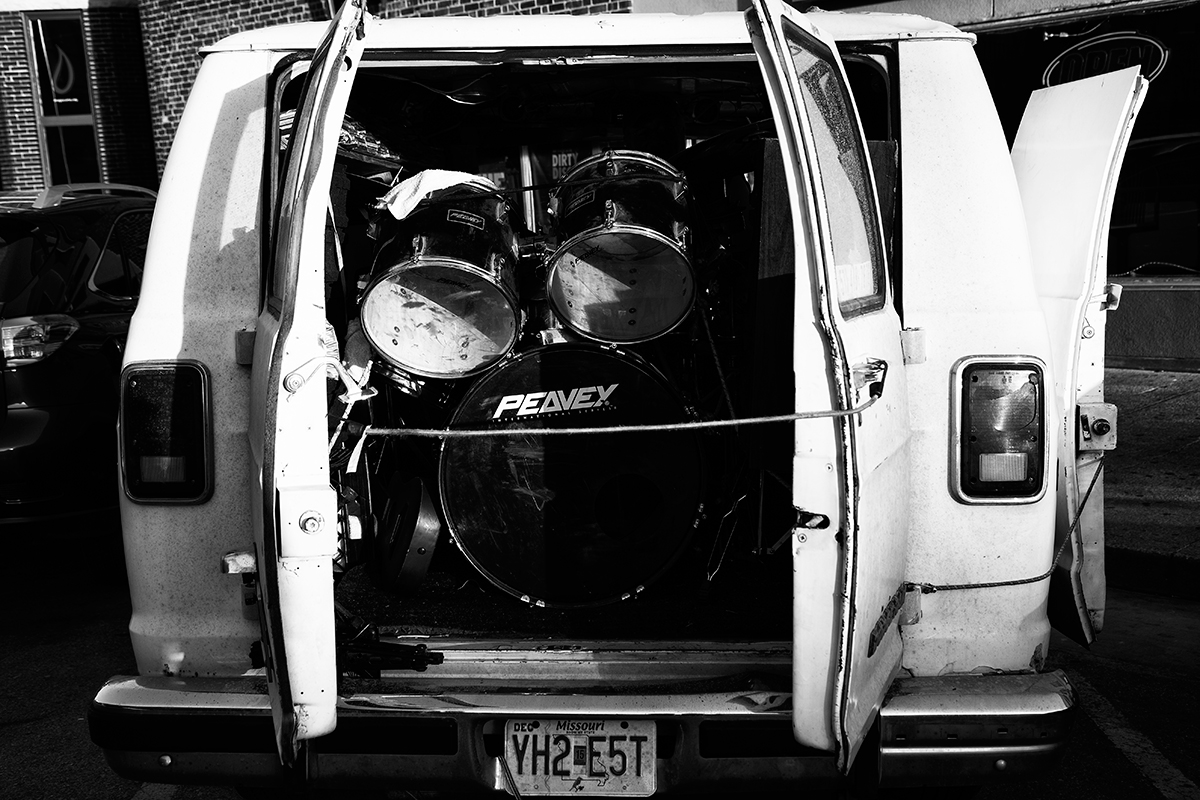 He’s been through a lot and still manages to keep his head above the water. After our stimulating conversation I went and enjoyed my nachos, feeling pleased as it always makes me happy to meet unique individuals.

Four hours later, on my way home from shooting, he was still banging away. It’s so great to see people living life the way they want.